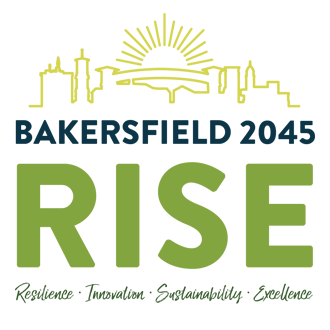 About the Housing Element

The Housing Element is one of the State-mandated components of the City’s General Plan. It offers a comprehensive strategy for the City to accommodate sufficient housing at all income levels. The Housing Element has two main purposes:

The updated Housing Element must be certified by the California Department of Housing and Community Development (HCD) by a pre-determined deadline, December 31, 2023. 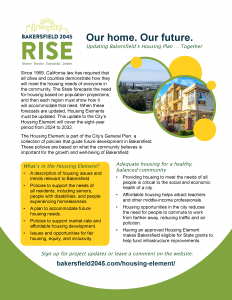 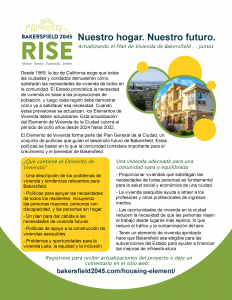 What the Housing Element Includes

The Housing Element includes a strategy for the City to meet its share of the Regional Housing Needs Allocation (RHNA).  HCD determines the total number of new housing units that each region must accommodate during the eight-year planning period. Through land use and zoning regulations, Bakersfield must plan for its share of the RHNA, including housing that is affordable to households at all income levels.

The Housing Element update will assess how current demands are being met and will plan for projected housing needs over the next eight years. The Housing Element also addresses housing for special needs populations, such as persons with disabilities, very low-income residents, and persons experiencing homelessness. The City’s housing strategy must also reduce any identified barriers to equality and opportunity.

The Housing Element update must include the following:

There are no upcoming events at this time.

View Past Event Materials
Sign Up for Project Updates

What is a Housing Element and what does it contain?

Since 1969, California has required all local governments to plan to meet the housing needs of everyone in the community through the development of a Housing Element, a component of the General Plan.

Per state law, the specific purposes of the Housing Element are to assess both current and future housing needs and constraints, and to establish housing goals, policies, and programs that provide a strategy for meeting the city’s housing needs.

The Housing Element is responsible for identifying a city’s existing and projected housing need; goals, policies, and quantified objectives on achieving housing for all economic segments of the population; available financial resources; scheduled programs for the preservation of housing and identification of adequate housing sites for all economic segments of the community, persons with special needs and emergency shelters.

When and why does the Housing Element need to be updated?

State law requires the Housing Element be updated every eight years to keep it up to date and accurate. The time from one update to the next is called a housing cycle. Bakersfield is currently in the 5th housing cycle that began in 2015 and will end in 2023. The upcoming 6th Housing Element cycle will cover the next eight-year planning period (2023-2031).

What is the Regional Housing Needs Allocation (RHNA)?

The RHNA decides the number of residential units the city must plan for in the Housing Element. The RHNA identifies the number of residential units required for each economic income segment, which includes very-low, low, moderate, and above-moderate incomes. The calculation of income levels is based on Area Median Income (AMI), which for Kern County is $70,700 per year for a household of four. The draft RHNA for Bakersfield is 37,461 housing units. The final RHNA is anticipated July 2022.

Must cities build the housing required by RHNA?

While cities do not generally build housing – that is the function of private developers – they do adopt plans, regulations, and programs that provide opportunities for how and where housing development occurs. Although the Housing Element identifies sites that are available in the city to plan for future housing, it does not mean the property owner is required to build the housing within the next 8 years or any time in the future. Rather, the City is required to identify sites that are suitable for development and may implement programs to support housing development.

What makes a house affordable to an income group?

The foundation of Housing Element Law is based on the premise that density is a proxy for affordability. More housing units on a site (density) typically translates to lower construction costs per unit, which reduces the rental/sale prices of those units (affordability). Based on this, HCD assigns minimum density figures to each income category. In Kern County, HCD identified a zoning density of 20 dwelling units/acre least to be appropriate for the development of housing that can accommodate low-income households.

How will housing locations be selected?

The updated housing plan must show the exact locations where future housing can be built and identify the potential number of homes that can be built at those locations. Included in the City’s Housing Element is an inventory of the sites that shows where housing units can be accommodated. The sites must meet certain criteria and have potential for development during the eight-year planning period. Some of the sites identified may already allow housing that can accommodate a certain percentage of the RHNA income categories.

The City may establish criteria and eliminate sites based on the following:

Criteria to support additional housing may include:

Additionally, per the HCD Site Inventory Guidebook, sites best suited to accommodate the RHNA for lower-income households have access to a variety of resources and opportunities like proximity to transit, access to good schools, and other factors.

The City’s housing opportunity sites plan is also developed with input from residents during the housing element update process. The Housing Element will align with previous and ongoing planning efforts in the city, such as the General Plan Update and the Transformative Climate Communities Plan.

What about other important topics, like homelessness or the high cost of housing? Are those addressed too?

AB 879 (2017) and AB 1397 (2017) – These bills require additional analysis and justification of the sites included in the site’s inventory of the City’s Housing Element.

AB 686 (2017) – AB 686 requires the City to administer its housing programs and activities in a manner to affirmatively further fair housing and not take any action that is inconsistent with this obligation.

SB 166 (2017) – SB 166 amended the No‐Net‐Loss rule to require that the land inventory and site identification programs in the Housing Element include sufficient sites to accommodate the unmet RHNA. The Project sites inventory far exceeds the City’s RHNA, allowing for additional sites to be used for additional housing units as needed.

SB 330 – SB 330 enacts changes to local development policies, permitting, and processes that will be in effect through January 1, 2025.